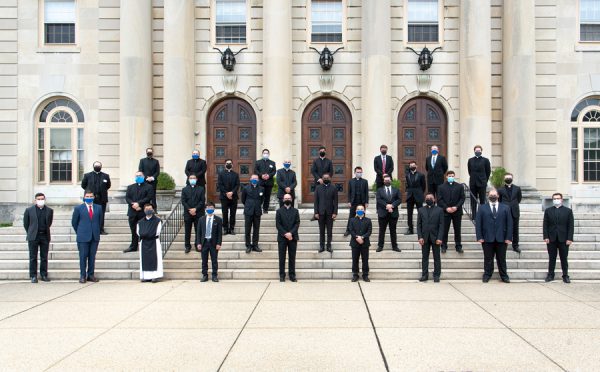 Fr. Phillip Brown, P.S.S., President-Rector, the Faculty and St. Mary’s Seminary & University Seminarians welcomed 30 men to formation at America’s first Roman Catholic Seminary on August 21st.  This year’s incoming class is the largest in over a decade. The Introduction to Seminary Life program concluded with a retreat for the entire community and Opening Covenant Liturgy, which was celebrated by Most Rev. William Lori, Archbishop of Baltimore.

The Mass was live-streamed and can be here.

Fr. Phillip Brown, P.S.S. blessed the new seminarian life wing on Monday, August 31st.  Fr. Brown thanked the team from EwingCole Architects and Lewis Contractors who completed the project this summer in time for the return of all the seminarians.   The Blessing was videoed and can be seen here: 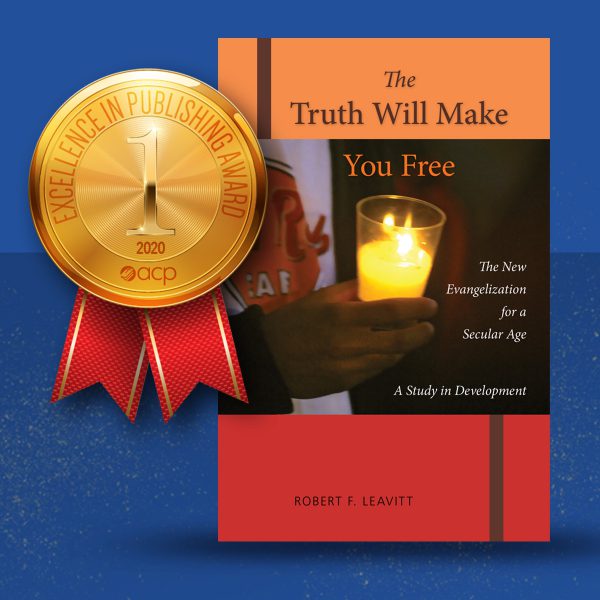 St. Mary’s Seminary & University is pleased to announce that Rev. Robert F. Leavitt, France-Merrick University Professor of Systematic Theology, has been awarded First Place in the category of theology for books published in 2019 by the Association of Catholic Publishers for  The Truth Will Make You Free: The New Evangelization for a Secular Age  (Liturgical Press). As many of you know Fr. Leavitt was President-Rector of St. Mary’s for 28 years prior to his retirement in 2008. St. Mary’s is extremely proud of Fr. Leavitt receiving First Place for this significant and influential contribution to the literature on The New Evangelization in the context of modern secular societies. 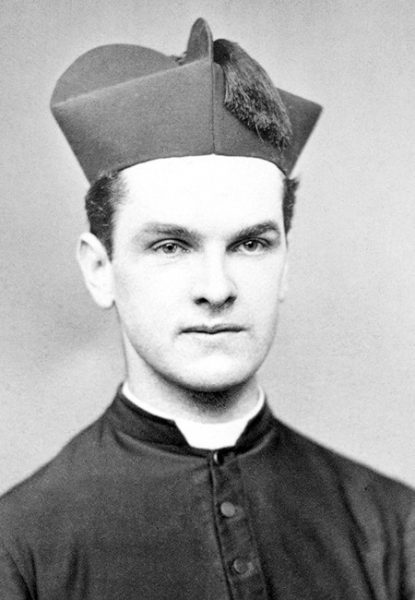 Venerable Father Michael J. McGivney – an alumnus of St. Mary’s Seminary class of 1877 who in 1888 founded the Knights of Columbus – will be formally elevated to “Blessed” by Pope Francis. 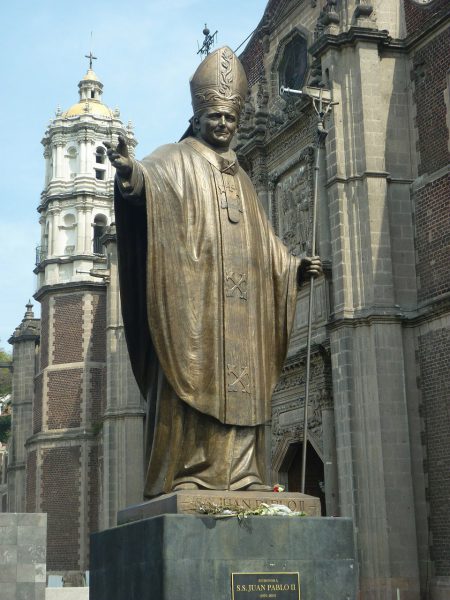 St. Mary’s Seminary & University has long embraced Pope St. John Paul’s commitment to ecumenism and celebrates the 25th anniversary of his encyclical – Ut Unum Sint. For over a half century, St. Mary’s Ecumenical Institute has been a center of theological education, dialogue, deeper understanding and reconciliation among all Christians, in dedication to Jesus’ hope and prayer, “That they may all be one. As you, Father, are in me and I am in you, may they also be in us…” (Jn 17:21)

USCCB Chairman for Ecumenical and Interreligious Affairs on 25th Anniversary of Encyclical on Catholic Church’s Commitment to Ecumenism   May 25, 2020

WASHINGTON – On the anniversary of the encyclical. . . on the Catholic Church’s commitment to ecumenism, Bishop Joseph C. Bambera of Scranton and chairman of the United States Conference of Catholic Bishops’ Committee on Ecumenical and Interreligious Affairs, has issued the following statement:

“May 25, 2020, marks the twenty-fifth anniversary of the promulgation of Pope St. John Paul II’s encyclical on the Catholic Church’s commitment to ecumenism, Ut Unum Sint. . . .This anniversary should serve as a reminder that the way of ecumenism is the way of the Church (7), and that all Catholics are called to espouse a strong commitment to building Christian unity.

“Pope St. John Paul II, who worked tirelessly to build ecumenical relationships, described the impulse of working for unity between Christians as ‘a duty of Christian conscience enlightened by faith and guided by love’ (8). We rejoice that Pope Benedict XVI and Pope Francis have continued to advance this singular mission between the Catholic Church and other Christian communities. We celebrate numerous theological convergences that have been discovered in ecumenical dialogues over the course of the past twenty-five years as we seek to grow closer together.

“Pope St. John Paul II concluded this encyclical with a profound insight from St. Cyprian’s Commentary on the Lord’s Prayer: ‘God can be appeased only by prayers that make peace. For God, the better offering is peace, brotherly concord, and a people made one by the Father, Son, and Holy Spirit’ (102). In a time of pandemic, people seek refuge and unity in their faith community. May this anniversary of Pope St. John Paul II’s call for Christian unity serve as a unique pastoral opportunity to build bridges by continuing to reach out with love to all of our brothers and sisters in Christ. May He heal our wounds of division and help us grow closer in unity, especially in this moment, by witnessing together to the peace of Christ that our world needs so very much.” 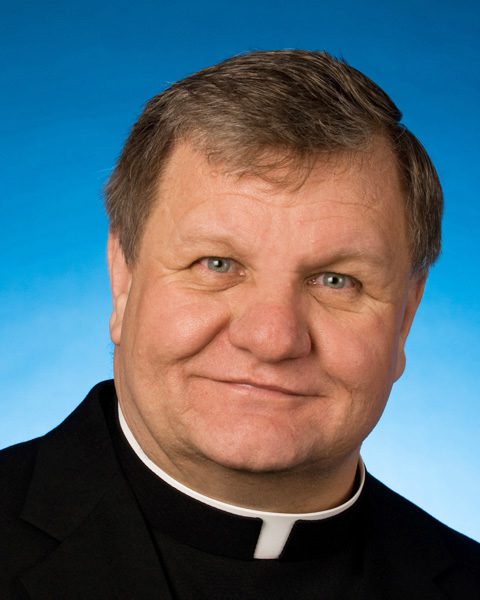 St. Mary’s Seminary & University community joins with the Sulpcian community in mourning the death of Fr. John Kemper.  Fr. Kemper struggled valiantly against esophageal cancer, diagnosed eighteen months ago and which unfortunately quickly metastasized. Through his strong spirit, determination and love for the work he was doing and the excellent medical care he received, Fr. Kemper lived much longer than originally expected, a testament to his strong will and positive attitude. Let us all pray for the peaceful repose of Fr. Kemper’s soul and for his family.

Requiescat in pace. May his soul and the souls of all the faithful departed rest in peace.

Please find the attached release that has been issued by the Diocese of Buffalo. 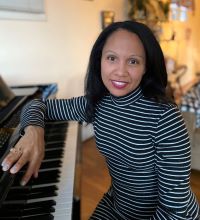 Please take comfort in this original piece from our faculty member Jennifer Miller. 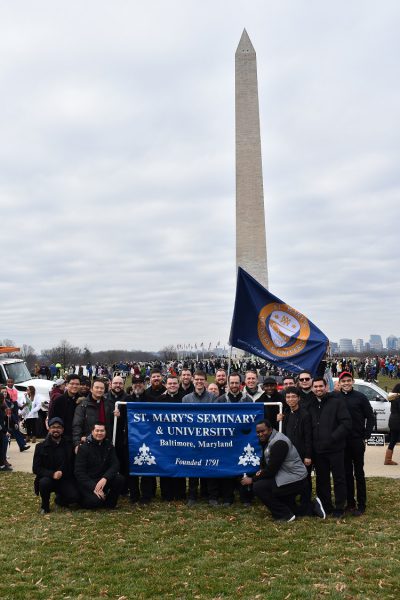 Every year the community of St. Mary’s Seminary & University is fully represented at the annual March for Life in Washington DC.  The seminarians and faculty members joined over 100,000 other marches on Friday, January 24th  to pray for an end to abortion and for the protection of the right to life of all people. 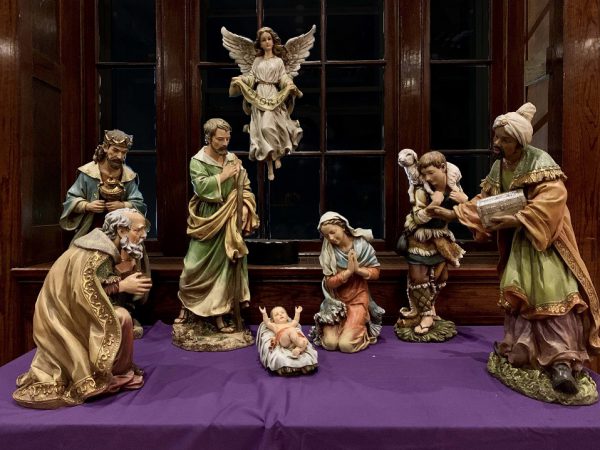 A blessed Christmas and joyful New Year to all from the St. Mary’s Seminary & University Community.